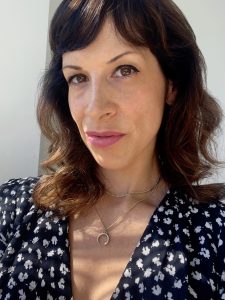 K. J. Edwards is a filmmaker and producer with Moontime Productions. Her family are wolf clan, in Kahnawá:ke and she is of Kanien’kehá:ka and settler ancestry. Kathleen was raised in Edmonton, Alberta, and relocated to Toronto in 2007, where she lived for 14 years. She has recently moved to Vancouver to attend Emily Carr University of Art & Design as part of the Full Residency Interdisciplinary Masters 2023 Cohort.

Kathleen is a graduate of Ryerson University’s Image Arts Film Production Program. She directed Meet The Sky as her final thesis project. The film, starring Chanin Lee, Tunchai Redvers, and Cheri Maracle, is making festival rounds and will have its World Premiere at the American Indian Film Festival in November of 2021. A trailer, as well as the crew credits, can be viewed here: https://vimeo.com/507140191

Kathleen works regularly as a freelance editor, production coordinator and producer. She is thrilled and grateful to be a mentee with the 2021 Vancouver International Film Festival Catalyst Mentorship Program.