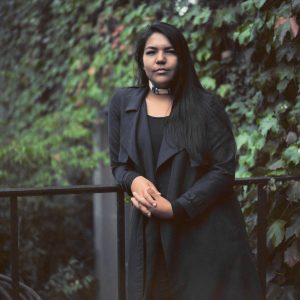 Victoria Anderson-Gardner is a queer Indigenous filmmaker and activist. She comes from the Ojibway lands of Eagle Lake First Nation but is based out of Toronto, Ontario. She currently is completing her thesis at Ryerson University for her BFA in Film Production with the School of Image Arts.

The most recent projects she has worked on include: An Inconvenient Indian directed by Michelle Latimer; she co-directed “Inviolable” (segment) for In Search of a Perfect World directed by Manfred Becker and hosted by Peter Mansbridge; as well as a couple independent films she’s in the process of completing.

She wants to be able to share the stories of Indigenous people from around the world through film, whether that be through a narrative lens or a non-fiction perspective. She believes that it’s important for people’s voices and stories to be heard in order for change to occur.